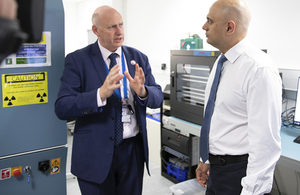 The Home Secretary, Sajid Javid, announced that a pioneering set of new technologies to improve the capabilities of the Child Abuse Image Database (CAID) will be provided to all UK police forces to help them fight online child abuse during a visit to the Metropolitan Police’s Digital Investigation Department.

All round the UK, units like the Met Police’s Digital Investigation Deptartment, work tirelessly to provide evidence in the most complex of criminal cases. This is painstaking and time-consuming work which can lead to delays of over 4 months on average to gather digital evidence vital to investigations.

The technology will help police forces dramatically speed up investigations whilst also limiting the number of indecent images of children officers need to view. Police will be provided with access to the following three new tools to be phased in following successful trials:

The tools were developed in partnership between the CAID Innovation Lab and UK-based companies Cyan Forensics, Qumodo and Vigil AI as part of the government’s efforts to tackle all forms of child sexual exploitation and abuse (CSEA).

In a BBC Breakfast interview, Mr Javid described the techniques as “game changing”, saying they would protect more victims and quickly help identify and bring more perpetrators to justice.

Our tools are available now for trial and purchase. Contact us to discuss how we can help you today.

Cyan Announces Series A Investment Round of Over £5M