The global pandemic put a halt to many businesses’ travel plans, including Cyan’s. Cyan had to postpone plans to visit partners, attend events and explore new opportunities in North America. But with travel restrictions to and from the UK starting to ease, Cyan made the most of the opportunity to finally cross the pond in person for the first time in nearly two years. Leading the charge was Cyan’s Head of Business Development, Graham Little, who made the seven-week trip.

“We had big plans this year for visiting North America but of course Covid-19 curtailed these. So, we jumped at the chance to finally go over there when travel restrictions meant we could make the trip. We had been invited to participate in some key events for us in North America, and with the world starting to edge back into normality in terms of travel, we were determined to make the most of the opportunity,” said Graham.

Cyan already works with the RCMP (Royal Canadian Mounted Police) at a federal level, which meant the first visit in Canada was to the RCMP’s National Child Exploitation Crime Centre (NCECC), where they are using Cyan’s technology to generate a Canadian national Contraband Filter. This was followed by police force visits in and around Toronto, Ottawa and Montreal, to demonstrate how Cyan’s technology can benefit their investigations.

Graham said, “Our existing Canadian network were able to introduce us to other police forces, where together with Teel Technologies and John Derbyshire, we were able to demonstrate how Cyan helps in the UK, talk about what we are doing with RCMP and how we can help locally with CSAM (Child Sexual Abuse Material) investigations.

“The time spent in Canada highlighted the synergies between the Canadian and UK law enforcement. Whilst there are subtle differences of course, attitudes towards CSAM investigations brought home to me that there are a lot more similarities and close alignments, and that our tools can make a positive difference to their investigations.”

Cyan in action in the United States

With entry granted to the United States, Graham made his way to Microsoft’s Campus outside of Seattle, WA for the 2021 North West Regional ICAC (Internet Crimes Against Children) Conference.

Graham said, “There was a lot of interest from the region’s ICAC task forces and many of their affiliate units, so we now have some exciting trials of our technology ongoing in that corner of the US.”

Graham’s second week in the US saw him working alongside Cyan’s US partner DATAPILOT, to visit police forces in and around Philadelphia, PA., before spending time with an ICAC taskforce in California. 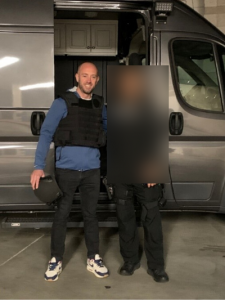 “This was a fascinating unit because they are one of the largest in the US and have a vast number of affiliate ICAC members collaborating with them,” said Graham. “One of the most rewarding things that’s happened in my professional career was being invited to a ‘ride along’ where I was able to observe and provide technical insights from a Cyan Forensics perspective to a live operation.”

Beyond the thrill of joining a live investigation, it was also an opportunity to spend quality time with officers from the ICAC task force that Graham found invaluable. He said, “They are clearly an immensely professional unit so it was a pleasure to get to know them, build relationships and see firsthand how they go about their business, whilst also jointly understanding how our tools can help”

The next stop for Graham was Boston, MA., to spend more time with partners DATAPILOT and join them for meetings to discuss Cyan’s technology with a selection of federal agencies.

Partner engagement in Washington DC followed, before crossing the country again to support a series of events on the West Coast. In San Diego, CA., Graham attended the Techno Security & Digital Forensics Conference for the first time, which allowed for demonstrations of Cyan’s technology to another Californian police department’s ICAC team and affiliate members.

Graham also attended a ‘Sex Offender Supervision Officer Training Class’, where he demonstrated Cyan Offender Manager, another key tool in the Cyan arsenal aimed at the US parole and probation market. Cyan’s Offender Manager tool uses the same underpinnings of Cyan Forensics’ technology but has been refined as a bespoke tool and developed closely with feedback from offender managers.

Graham spoke to an audience of around 50 probation officers at the event, all from across the US. He said, “They were extremely impressed with our fast, simple and thorough Cyan Offender Manager tool. We also met some of our probation and parole customers for the first time in person, which was fantastic.”

Crucially, this leg of the tour brought Graham and Cyan in front of a new market for the company in both the UK and North America. “The probation and parole market is a really exciting one for Cyan. To be able to talk to this community, beyond pure digital forensics, was hugely insightful. It is great to see our expanding suite of tools being so well received in North America,” said Graham.

It proved to be a packed schedule, but one that provided invaluable relationship building opportunities and live demonstrations of Cyan’s game-changing tools. The overall value of the trip and the experiences were not lost on Graham.

He said, “It was a real proof point to show that our tools can and will make a massive impact in North America to the same extent as they are currently in the UK. I was blown away with the reaction and excitement towards our rapid digital triage tools that I experienced firsthand in Canada and the United States.”

While Graham spearheaded the North American trip himself, he was quick to point out the success was down to a team effort, with him receiving constant support from the Cyan team back in the UK.

Graham said, “I was lucky enough to go over in person, but it was a real team effort from the entire Cyan Forensics family, from our development and marketing teams in Edinburgh, to our Board and Advisory Board, all supporting this fantastic opportunity. We can’t wait to go back for more.”